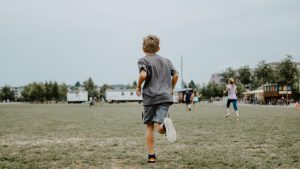 This is a true story written by a youth survivor of sexual abuse. Names have been changed to protect the identity of the children involved.

This “thing” isn’t something that happened on a day-to-day basis nor did it happen to everyone. It doesn’t mean it will happen to you or a kid you love but keep on reading this please.

I was 7 years old and lived a happy fun life, then disaster struck.

Since I was 7 to 9 years old, almost everyday of the week, I was being sexually abused and no one knew…except my “friend”, Sam (age 13), who was the one who was abusing me. I have an older brother and a younger brother and sister, and we lived next door to another family who we felt were our best friends. We all played on a daily basis for hours. Our parents knew each other and if you could not find one of us, we were at the other’s house. We all trusted each other. We were always at our house or Sam’s. A parent was always home at our house as well as his. We would go back and forth between the houses without any suspicion from any parent.

The abuse did not happen right away. It happened over time.

It was like Sam was playing me and getting me ready for something, but I had no clue was going to happen. I got no warning from my brothers, who Sam tried to mess with first. They luckily dodged his attack and never mentioned it to me or anyone else.

I trusted Sam and looked up to him because he was older and stronger.

His plan began when he came up with a game.  In this “game”, he formed a group or club that started with telling us we had to follow his directions in order to join the club. As a 7-year-old kid, I wanted to be in his club – no matter what it was, so I could be included with the other kids. I wanted to be liked and accepted and all the other things we did were way fun so I was excited to be a part of the club.

My brothers must have sniffed out his tricks and I had no idea what he was doing. I feel really dumb now to be the one that fell for his plan. I wish I would have known because it would have saved me a lot of trouble, pain, embarrassment and regret that I feel to this day.

Then the club stopped and things happened on a daily basis.

My nightmare was always at one particular big bush on our property right by our house. This bush was up against a fence – I remember it well – every single detail.

He would call a meeting with us. He started with my older brother and I am guessing nothing happened with him. Then he approached my other brother and my brother stopped it and left it all alone.

Then there was me.

I fell for it.

The meetings were daily – behind the bush.

I dreaded seeing him. I tried to make excuses.

I hid it well from my mom and dad. I felt I would be in big trouble if they knew what was going on. I felt it was my fault and felt I would be punished for what was happening to me. I blocked out what was happening hoping it was a bad dream or maybe never happened. I felt like his hostage. I loved my house, I was very social, loved my family, the outdoors, and playing with other kids so I did not want to lose any of it. I kept quiet.

One day my mom had what she calls an odd moment or gut feeling.

She saw me and Sam on the patio alone. He was waiting for everyone to leave. My mom asked me what was going on. I ignored her and responded with “Nothing”. She asked me again. I gave her the same response, “Nothing”. She was not going to accept that answer. She would not accept my answer and convinced me to tell her.

I was cornered. I was horrified, ashamed, scared, and embarrassed. I did not want to have to deal with what was going to happen. I told her the basics. My mom was so nice and told me to go sit in my room for a while. Looking back, I imagine she had to get her thoughts together and she was going to have to tell my dad.

I felt a little relieved but also didn’t feel safe. I was afraid Sam would come and hurt me or I would be in trouble.

I went to the hospital to get checked out. We had to make sure it was all true. It was true. There were police officers, medics, counselors, a fire truck, and other people. I felt trapped. It seems like my mind is in a fog when I think about it now.

Not only three years of my life and my innocence. I lost the house I loved. Our large property to play on. My freedom to play without worry. The family I loved next door. My friend next door. The idea of Sam being my friend.

I feel betrayed and lost at times. Why me?

I want to make a difference in this world.

If it takes me having to share this story, I will.